It seemed to be all my friend Eppie could remember about her father's death: the Ten minutes right before it. She had watched him die for months and had grieved for years afterward but the climax of the "event" as she remembered it was never the moment of death itself, but the Ten minutes beforehand. 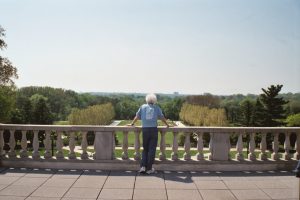 It always seemed odd to me that Ten minutes of life would mean more than the life lost, but the wistful stare in Eppie's eyes when we talked about it brought me closer to understanding. You see, in those last Ten minutes of her father's life, she realized that her father was dying. According to her (and sometimes her mother), their eyes met as this sunk in at about minute number Three and that was when he realized it too. One of the nurses reflected later that in that moment, even though all the damn machines were going off and people were waving goodbye in their hearts, he felt like the cancer "just up and left" Eppie's father and that "if we hadn't all been so intent on him dying he might have up and walked away from the whole mess." But with Seven minutes to go, what are you gonna do, especially if you don't know you have even that much?

Cry is what Eppie wanted to do, but her father wouldn't have it. He was mostly gone and mostly ready, but he wasn't just about to slip out. The damnedest thing is that every power involved seemed raring for him to do just that, but right as minute Four started to head into its second half, he sat up in bed and held out his hands.

The real excitement wasn't that he was sitting up, though this was apparently something he hadn't done since he woke from the last round of miserable skin slashing and marrow moving, but the real excitement came when he held out his right hand as if it were a flat slate and with his left made a scribbling motion. Now it seems his hands were pretty weak so I guess the motion wasn't that clear to Eppie at the time, so it took until about minute Five and forty-five seconds until she realized that her father, who had lived 43 years of life and who had devoted 12 of them to her happiness, was trying to get a message across. And this time, it wasn't the "need more water" or the "change the channel" signing he would have to make because there were so many awful tubes in his beautiful mouth; no, this time it was something that gave him enough strength to hoist his tired and dying body closer to his daughter. This time it was a message that made nothing else matter.

Eppie never got that message. No one in that room did. The very thought of the situation makes me want to cry, and I can't really even begin to imagine what it does to my friend. When minute Six reared its head, Eppie shouted for a paper and pen and her mom followed Seconds later with a cry for the same. The one time when Eppie went into a lot of detail about it, she said "the damn hospital kept the place so clean and reality-free that there wasn't a writing utensil or paper to be found in the room." But it got worse. The nurse who felt the cancer leave walked out looking for something to write on as minute Seven walked in. Eppie's father looked around questioningly and his hand stopped scribbling. He just sat there, she said. "Just sat there and waited for something to write on. My dad had been waiting to die for six months and now all he had to wait for was a pen and some paper."

The nurse had to go far to get it. He had to watch the head nurse fumble around the admit desk for something suitable for a patient to use. He had to watch the head nurse scribble ink on a piece of scratch paper to make sure the pen worked. He could not say anything because it was almost minute Eight and that ink "might as well have been life flowing out of that poor man's body."

Eight and a half and his head started to droop. Eight and forty and his head hit the pillow. Just a few before Nine and his hands fell all the way down by his side. Nine-oh-five and Eppie grabbed both of them. Nine ten and his squinting eyes were for ced closed by the rising smile that defied a tube that gave him breath. Nine thirty and there was so little movement and so many tears. Minute Ten rolled around and the message left forever like a secret that is so secret you forget about it. After that, Eppie's life was only ever measured in hours and days and tears, but never in such minutes and seconds as those.