The assignment given for my New Testament course was to "write a biblical parable." 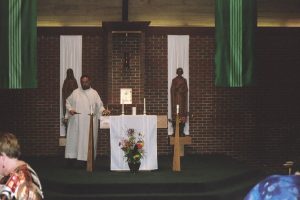 What I came up with is obviously not a parable in the traditional sense, but I like to think of it as the parable of parables; it is the story of a common theme that runs throughout the literature of the biblical time and that represents a fundamental (or at least well-established) part about how our society tends to work. In that sense it is a story that evokes a deeper meaning from itself when examined closely in relation to our own lives, as does a parable in its purer form.

Once there was a boy born of no great noticeable lineage. When he grew up, he found that he was deeply disturbed by the problems of the world around him and that he was going to devote his life to changing things radically. He found that he was a good speaker and had a knack for communicating with people in direct, powerful ways. He learned a lot about the problems he was facing and he lived and dined among those who contributed to them.

He began to talk, in public and in private, about the problems and about the fundamental causes and possible solutions. He would sometimes end up with large groups of people gathered around him as he talked. Though he had many followers who believed in his cause, he only had a few that he considered his true friends and true believers. Besides, it was becoming dangerous for him and his followers to talk about the problems any more because there were many who opposed his views or said that he had no right in the first place to address the problems because of who he was. After a while, his following and support got so large that it seemed he was actually making a difference. People were actually beginning to catch on to what he was saying, and at the same time becoming less accepting of those who caused the problems or who had oppressed their existence. Finally, his enemies decided that his words were too dangerous because they addressed deeply buried problems that, to face, would shake the very foundations of the world built on top of them.

He was tried and convicted by the attitudes of his time and by the prejudices of his enemies, and so they plotted to kill him as punishment. They did so, quietly and quite normally with the typical sort of lynching. He died, and in a fairly short time, the mission and movement that he had created did not have enough forward motion to sustain itself, and it died fairly soon thereafter.