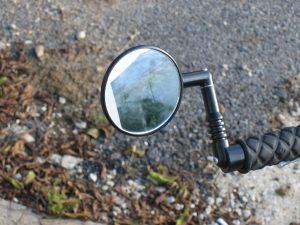 While I was in Chicago this past week for the professional technical conference some of us from Summersault were attending, we were walking to dinner one night and witnessed the driver of an SUV come within inches of hitting a cyclist. Despite the fact that the driver was rushing to turn through a yellow light, in typical big-city style, the driver of the SUV had the additional gall to yell at the cyclist to look out where she was going and then speed off. The biker was shaken up a bit but carried on fine, and we went on our way.

Not the most positive exchange, but at least the cyclist wasn't actually hit and hurt or killed. Yesterday marked the one year anniversary of the death of Earlham graduate Jessica Bullen after being struck by a driver in Madison, Wisconsin - her story and memorial fund are described here. Even more sadly, Jessica was a strong advocate (in a town that I consider quite biker-friendly already) for cyclists and worked to raise awareness for motorists that inattentive driving could result in a preventable injury or death. My life has been impacted in other ways by similar deaths - a good friend of my family started Fernside, a now internationally known center for grieving children, after her son was killed on his bike as a result of being struck by a car.

I'm not as much of a bike commuter as I want to be, but I ride around town enough to know that many Richmond drivers aren't really tuned in to the right of way that cyclists have - pretty much the same that motorists have. Indiana Code 9-21-11-2 Section 2. says that "A person riding a bicycle upon a roadway has all the rights and duties under this article that are applicable to a person who drives a vehicle," with a few small exceptions. Many folks think that because cars are so dominant in size and speed, they enjoy some special protection under law for use of the public streets. It even makes its way into the mindsets of would-be bikers - I can't count how many people I've talked to who have said they would ride their bike to commute around town more if they weren't so scared of being on the roads that would make that possible because of careless drivers.

Those fears and misconception carry into the unfortunate opinions that develop when a crash does happen. The attorney for Jessica's killer is quoted as saying that "I don't think these cases should be crimes," but as Jessica's friends and family have said, when a human being loses their life due to the carelessness of others, the issue of whether it was car versus bike doesn't exempt either party from being held accountable for their actions.

Whether you drive or bike or both or neither, please be careful.