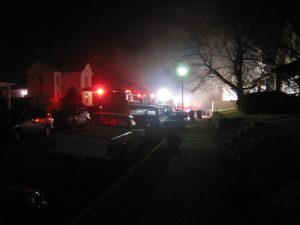 It's interesting to me that the phrase "for national security reasons," offered by the U.S. government and governments around the world to justify various uncomfortable activities (withholding information from or spying on its citizens, demanding cooperation from corporations in legal gray areas, etc.) is so commonly used and so consistently effective. It's effectiveness is based on an apparently safe assumption that the American people largely subscribe to at least one of two world-views: 1) The needs of the many outweigh the needs of the few, and 2) the government knows what's best for us as individual citizens better than we do ourselves.

How do these world-views work in the government's favor?

#1 is about Sacrifice, and there are lots of emotionally-framed corollaries that go with it. You've seen the movies and read the books, and you don't want to be even peripherally responsible for the deaths of thousands of your fellow citizens, and so you will go along with some significant level of discomfort before you actually take a stand and stop sacrificing. "All I have to do is give up X, and surely X is worth saving some lives, and surely it's not near the sacrifice that our men and women in Iraq are making." Besides, everybody's doing it. If you don't go along with the plan, you're a selfish and unfeeling person who doesn't deserve the rights and privileges afforded you under our system of government. All we have to do is hear the phrase "for national security reasons" and this line of thinking kicks in.

#2 is about Artificial Complexity. We think that surely no one citizen can appreciate or know all of the complex conceptual and practical bits of information that go into making the USA run and keeping her safe. "Surely it is not possible for me to make a decision about what's right for our country based on what I know, because there are so many more people who know more, and they are very important and they've had lots of experience and they're paid very well and they wear special uniforms and..." We defer fundamental decisions about what's right and wrong to others because we think we do not have enough information or enough ability to make those decisions on our own. An important supporting behavior is that we assume any completely egregious abuses of this deference will be so obviously wrong that the system will fix itself. Surely corruption of any significance will not go unnoticed, and surely the media and lawmakers and watchdogs will make enough of a fuss to get everything straightened out. But until then, we err on the side of trust, and we trust that when someone says an action is "for national security reasons," they know best.

Both premises require a level of faith in federal governmental structures that I'm not sure is present or common at any other level. If Mayor Hutton told us that she was going to be reviewing records of phone calls within the city of Richmond in the name of keeping us safe, she would be thrown out of office on her ear. If Sheriff Strittmatter told us that keeping Wayne County safe required the Sheriff's department having the ability to indefinitely detain anyone for any reason (or no reason) without a warrant and possibly use coercive physical force to extract information from them, we would (I sincerely hope) not stand for it for one day.

So why do we accept such actions at a level that is even less accountable to us, that is run by people with a much worse track record of honesty and selflessness, that is consistently and predictably broken in its ability to serve our needs as a local community?

#1 Sacrifice: in the recent past, it has been a noble and patriotic thing to unquestioningly give of yourself in the name of service to your country, and most every part of our culture tells us that it still is, that there's no sacrifice that will be demanded of you (in the name of national security) that isn't valid and honorable. When you refuse to go against what your country tells you is right and good, you move incredibly far outside the comfort zone of the average citizen. And then you remember that life was better on the inside of that zone, and you go back.

#2 Artificial Complexity: It's overwhelming to think about standing up to the federal government, and they like it that way. We wonder what number to call to tell Verizon, the local phone company, that you don't want them to give your call records over to the NSA, and then just as we're about to threaten to withdraw our funds from them as a customer, we remember that the usurpation of critical local services into the corporate global economy has taken away our purchasing power, and that we don't have that choice any more. And then we think about all of the layers and dimensions of the ways in which we have yielded our power to others, and we fall asleep on the couch in front of the television.

The bottom line: most of the time, when we go along with the demands made of us in the name of national security, we don't do so because we want to. I think we do so because we feel we have no other reasonable choice that allows us to continue living the life we want. But at what cost?

When you hear that something is being done in your name by your government in the name of perpetuating and preserving that same government, do you ask yourself whether that is really in your best interest? Do you wonder what you can do about it if it isn't?