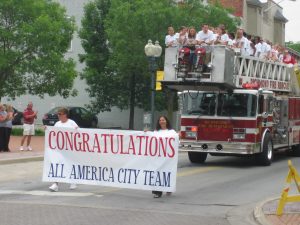 This is a hard post to write because a lot of people who I care about and respect are very invested in and excited about the recent news that Richmond is one of the winners of the National Civic League's "All-America City" award.

First, I want to say that I do offer my genuine congratulations to the youth, their mentors and supporters who put together Richmond's application and saw it through to the win.  To achieve national recognition for our city is commendable, and I know that the passion, time and energy you put into this effort comes from a deep love of this community and its potential.  Richmond needs more people like you who care enough to act, and who do so with a bright future in mind.

Now on to the harder part:

My fellow blogger Jean Harper has written a critique of this effort that raises some very worthy questions about the value of spending our time trying to win this label.  Other people in other candidate cities are asking the same questions. The recurring theme: "why should we put all that time and money into competing for a title that is just a title, when we have real problems to solve back home?"

I think it's a good sign that these questioning conversations are happening, but I have a difficult time with some of Jean's more biting comments:

I would like to take the community leaders aside and say this: Look. Quit lying to our kids. Quit filling their heads with boosterish nonsense. Quit leading them on these exhausting exercises which result in virtually nothing.

I posted a response to her entry on her blog, but I thought I'd share it here too:

Thanks for putting out some challenging thoughts about this award news.

I've been cogitating on similar ideas for a while now, and while I share your concern that the return on investment for this effort might not be justifiable, I'm not sure I can follow you all the way to the point of calling it lying to the youth involved, or to saying that a community improvement effort that doesn't necessarily directly engage the homeless is one to eschew.

This comes from my general philosophy of community improvement, which I think fellow commenter Aaron touched on: "There is no one right way to make Richmond a better place."  That is, it just won't work to say that there's a single plan of action for helping this community solve all of its problems, and then execute it and hope for the best on the other side.

We do need to engage all of the disenfranchised populations you talked about, and re-think our education system and notions of meaningful employment.  But we also need the rallying and the parades and the vague award titles and the hype.  We need all of it, and we need anyone who has a bit of passion and energy for this place to manifest their care in whatever way they think they can bring the most to the rest of us.

Richmond has suffered recently, I think, at the hands of those who preach homogeneity and "one right way, there is no alternative" when it comes to community improvement and economic development.  So I just can't begrudge the successes of someone who is willing to say "well, what if we try something else?  What if we go a different direction and see what happens?"  I may have serious concerns about their particular choice of direction (as I do in this case), but until there are more people taking Richmond's future into their own hands, until there are so many "shovel-ready, high-impact" projects for people to plug into that we don't know where to start, I don't think we have the luxury of criticizing those who are making a go of it in their own way.

Even with limited resources, even knowing there are those with other clear and pressing daily needs that are not being met, I still think there's value in diversity of approach.  We don't know what might spark the kinds of revival and rejuvenation that really will make a big difference.

Thanks again for calling us all out on this, not allowing for unquestioned or unconditional glee when we know reality demands more of us.

5 thoughts on “What's in a name: All-America City?”