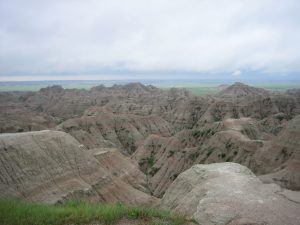 As a part of the trip to Oregon, we took the opportunity to see some sights along the way, including Yellowstone National Park, Mt. Rushmore, Grand Teton National Park, and neat little towns like Deadwood, South Dakota.

The most memorable and terrifying part of the trip was our stop at Badlands National Park.  We should have known something was brewing when the gas station a few miles outside the entrance to the park was all atwitter with talk of the weather and the ominous storm clouds in the distance, but we pressed on anyway.

When we got to a particularly beautiful canyon area and went out for a walk, the winds were blowing hard and bringing some serious temperature changes.  The sky continued to darken, and we knew we were in for a storm.  The rattlesnake that lay in our path a few yards up ahead seemed to suggest Turn Back While You Still Can, so we did.

Fellow tourists all around were darting into their cars quickly, so I let go of the "isn't it wonderful to experience nature up close and directly" shtick and got in the car.

Not sixty seconds after we'd pulled out onto the road, I saw in the distance, in the direction of the ominous clouds, a breath-taking scene: the land and sky were turning white as some kind of wall of moisture moved across it.  Toward us.  I pulled over to the side of the road.  "I think we're about to..."

I didn't even have time to finish my sentence when the first piece of hail hit.  It sounded like the car had been shot, and we both jumped in our seats.  There were definitely some forceful verbal expressions of fear and/or excitement going on.  Popcorn style, the huge pieces of hail continued to fall, although it seemed more like they were being launched - from above, from the side, from all around.  THWAP!  THWAP! THWAP!

When one left a nice nine-inch crack across the windshield, we looked at each other and wondered if we were in more danger than we first thought.  We scrambled to cover our faces with jackets, etc. in case something did shatter, though I couldn't resist at times watching the balls of ice slam into the hood of the car.  BLAM!  BLAM! BLAM! 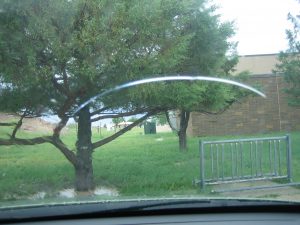 After a few minutes, it was over.  We pulled into a ranger station a bit up the road, and got out to survey the damage, along with a bunch of other drivers.  Windshields were broken, sunroofs cracked, and the huge dents in the metal were just unreal.  At least one ambulance went by, and Kelly and I recalled how close we'd been to standing outside when the ice hit.  Strangers became temporary friends as we all recounted our experience of the hailstorm.  The ranger was nonchalant: "we get about two of those per year."

Fortunately for us, the damage we experienced can be relatively easily repaired, and we made it to our final destination without further weather drama. I have a certain amount of polite resentment for the insurance industry as a whole, but I have to say that I'm certainly lucky to have it in this case.  Ann and the folks at my wonderful insurance agency Harrington Hoch were able to process the claim quickly, and after the technicians at the auto body shop in Portland apparently dropped what they were doing to come see the cottage cheesed surfaces of the car when it came in, they were excited to get to work making the car look like new.

For me, I won't ever again make the assumption of emerging from a hail storm unscathed, and when everyone around me is running for cover, I will be more open to the possibility (unlikely as it is) that they know something I don't.

Your own severe weather event stories are welcome in the comment section below.

3 thoughts on “Hail in the Badlands”