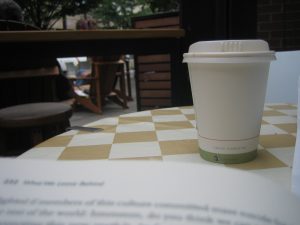 It's been a decent summer of reading for me, and I thought I'd post some very brief reviews of some of what I've encountered along the way.  For each book I’ve linked to an online purchase option, but please consider buying from your locally-owned bookseller or visiting your local library first.  I've organized the reviews into three sections: Culture, Novels and Business & Politics:

Ghost in the Wires by Kevin Mitnick
Finally, Mitnick gets to tell his side of the story when it comes to his adventures in computer cracking and social engineering.  Though his writing style isn't particularly compelling and his personal meditations on the interpersonal aspects of his adventures are a bit awkward, the details of how he pulled off some pretty technologically impressive (albeit illegal and sometimes destructive) hacks - and how law enforcement responded - make for compelling reading on their own.  As someone who spent a fair number of hours in my childhood trying to deconstruct how the phone system and the emerging world of BBSes and Internet nodes worked, Mitnick's book is a great visit to the past and a reminder that humans continue to be the weakest link in all computer security.

What We Leave Behind by Derrick Jensen and Aric McBay
Partly a book about how our society views waste of all kinds from all sources, from our individual person to our households to our cities, and what we do with waste based on those views.  Partly a book about the ethical, intellectual and spiritual challenges that come with seeing a truth about how the world works, and then deciding what to do with/about that truth.  As with other Jensen books I've read, the experience of following his train of thought is at once uncomfortable and enlightening, and always takes me to new places in my own consideration of "the meaning of life," even when I disagree with some of the thinking that got me there.

The End of Growth by Richard Heinberg (partial)
Chock full of data and economic analysis that refutes conventional wisdom about the state of the world economy.  Heinberg basically says (as he has in other books and settings) that in the face of rising energy and food prices, debt levels, and disastrous choices about our relationship with the surrounding environment, growth as we've known it can't continue (not "it shouldn't" but "it's not physically possible").  Especially as I work on economic issues here in my own town, his discussions around the point that there are no new jobs, just jobs moved around from one place to another, were particularly poignant.  But Heinberg as always does a good job of painting a picture of a version of humanity that can see "progress" without depending on "growth."

Daemon by Daniel Suarez
One of the best high-tech thriller novels I've read.  A mix of Neal Stephenson, Stephen King and Tom Clancy.  A cautionary tale about the power we give to the organizations and corporations (and individuals) who manage our electronic identities, and some imaginative examples of possible abuse.  And like the best tech thrillers, the technology references are realistic and accurate, paying respect to the hackers and hobbyists who can spot a fabricated plot device or an oversimplified explanation of how hacking an unsecured Wifi signal works a mile away.  Don't let your housemates read it if they're skeptical of your home automation efforts (you'll see why), but I couldn't put it down.

The Associate by John Grisham
A lawyer gets into an interesting and sometimes dangerous situation involving powerful corporations and other people he's not quite sure he can trust, and requires creative legal maneuvering and the confronting of his personal demons to get out of it alive.  Yes, it's the plot line of most every other Grisham novel, and yes, it was once again an entertaining read.

Water for Elephants by Sara Gruen
Such a good novel! Well-written, exciting, immersive, touching, real.  I had recently forgotten what it felt like to read a book where you start to care deeply about the characters and what happens to them, and where even when the situations or places or time period feel far away, the human dynamics and choices that are described bring insight and understanding about what it means to be alive.  Haven't seen the movie, don't know if I want to replace the rich imagery in my head with the Hollywood version.

The Apostle by Brad Thor (partial)
Political intrigue.  War and terrorists.  Secret operatives and daring missions.  Blah blah blah.  Maybe I didn't give this enough of a chance and Mr. Thor seems to have found a winning formula for bestsellers, but I found it shallow, plastic-y and unreadable, even for vacation reading, and finally gave up after a few hundred pages.

Campaign Boot Camp by Christine Pelosi
Politics the Wellstone Way by Wellstone Action! and edited by Bill Lofy
Two hands-on, how-to books for those who want to be engaged in the political process, especially candidates.  While in many cases I was pleased to see that I've often been doing "the right things" in my own first venture into running for elected office, it was helpful to have these two contributions to the conversations I'm having with my volunteers and supporters.  The Pelosi book was perhaps more basic conceptual information while the Wellstone book was more of a practical guide to getting certain campaign things done, with examples and templates to help.

First Break All the Rules by Marcus Buckingham and Curt Coffman
Extensively researched and well written reflections on what "great managers" do differently from all other kinds of managers.  I took a lot of notes on this one, and am working my way through implementing the valuable advice I found for my own company, but it would be a useful read for anyone in a position of leading a team.

The Carrot Principle by Adrian Gostick and Chester Elton
A quick read on how to reward and engage members of a team.  Not ground-breaking, but well researched and full of good ideas.  Complements some other works by the same authors that I hope to check out soon.

It's Okay to Be The Boss by Bruce Tulgan
Tulgan calls out what I think is a real problem - leaders who don't actually lead - but then proceeds to write what I found to be a fairly surface-level look at when and why it happens and what to do about it.  He seemed intent on appearing to be in opposition to most kinds of conventional management wisdom (or even some of the more modern refinement of said wisdom, see above), but in the end just ends up presenting the same kinds of advice in slightly different ways and, I'm sorry to say, with much less attention to the power dynamics and humanity of management-employee relationships.  Not recommended.

What have you been reading this summer?