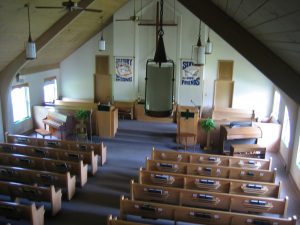 It's too bad, then, that we often seem to be trending toward the further diluting and replacing of a strong public life, especially for our younger community members. In Richmond, the Common Council recently decided to enact a new curfew that restricts people under the age of 18 from being out past a certain time of the evening, and threatens to fine the parents of those people progressively higher for each offense.

As with most laws that say "if you're under a certain age, the government requires that you do or do not ____", I think it's yet another unnecessary and misguided transfer of a community's power and responsibility to decide how it wants to live away from the community members themselves (especially parents and children) and to the government and accompanying police state. (Do we still honestly believe that the time elapsed since birth is such a precise measure of maturity, self-discipline, ethics or responsibility?) But in this case, it's one of those particularly draconian measures that says "you, human, must stay in this particular physical space from this time of day to that time of day." Do we really want that kind of imperative coming from lawmakers who don't live with us, who don't know what our private lives entail?

I know that one argument for this kind of curfew is that it helps keep order in the city, reducing the amount of policing that has to be done. The implication here is that (A) people under the age of 18 are the predominant cause of disorder, and (B) a form of order that involves restricting our public lives by threat of physical force and economic hardship is a desirable one. I would suggest that neither A nor B are generally true, and that by trying to relieve the burden of policing our streets during certain hours, we pursue outcomes that are far inferior to creating a community where the streets are a positive part of a healthy public life.

It's putting a band-aid on symptoms and avoiding the deeper conversations we could have about why we don't think we can live together well without a curfew. It's an example of a world run by old minds that think "how can I keep these bad things from happening?" instead of new minds that think "how can we best create the world we want to live in?" And it makes you start to think about what other programs are in place that artificially hold us back or keep us confined, when there are much more important things we should be spending our time and energy on.