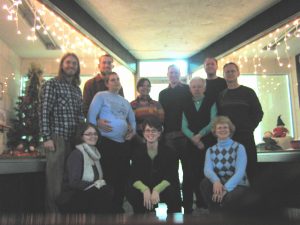 As I was preparing to graduate from college, I had already decided that I would be staying in the same town (Richmond) for the foreseeable future, and so I was a spectator to the strange but customary phenomenon of having all of my friends from the past four years pack up and prepare to leave town. In many cases they were good friends - loved ones with whom I had experienced some of the most challenging and growing years of my life so far. They knew me, and I knew them, and we had found a rhythm together in that bubble of academia. In other cases, they were people who I hadn't really had time to fully know despite wanting to, and watched whatever sense of possibility that existed there fade away as they went. At the time I had a feeling in my gut that it just wasn't right, wasn't natural to spend so much time building community with others only to see it scattered to the wind of change blown forth by the fairly arbitrary milestone of graduation day.

Since them I've come to wonder with even more bewilderment why we so often leave the communities that love us. We spend so much of our lives trying to find our identities, trying to establish who we are in a given context, trying to find people we can connect to, bond with, lean on. Why do we then also seem to be able to so quickly give those things up because of a job change, a shift in our passions, a thought of journeying across the state, the region, the country, the world to find what we're looking for?

I know part of the answer: it's cultural. As we become an increasingly information-driven society that is joined together by light-speed networks and overnight shipping and deceivingly cheap travel, we're untethered from the conventional notions of what it means to "make a living somewhere." Staying geographically close to our families or the land we grew up on or the traditions we know is increasingly less relevant. And yet the same cultural pressures still drive us to center much of our decision making around where we will work, where our career will be based. That doesn't seem to be a change for the better...I'm still surprised at how much trouble someone will go to -- the packing, the moving, the saying goodbye, the saying hello, making new friends, finding their way, getting adjusted, feeling a sense of longing, and then getting through it -- just to transplant themselves from one way of spending 8 hours per day to a slightly different way of spending 8 hours per day! As a culture, we rarely go to the same measures to be near a family member, or to rekindle old friendships, or to let a love flourish, or to seek community with others who have skills, passions and resources that complement our own.

Indeed, it's just outright scary to make a commitment to a given community just because they happen to love us and just because we happen to love them back. People can barely seem to do it in a monogamous romantic relationship -- how the heck are we supposed to do it with a group of idiosyncratic friends, professional colleagues, or happenstance geographical neighbors where the social barriers are even higher and the vulnerabilities deeper? And, who's going to pay the bills, eh? Everyone has to move on and do what they need to do, right? If we build it where we are, the sense of community will always come, yeah?

Biology and anthropology show us that every social species in existence has some form of community that defines a grouping of those creatures. Antelopes have herds, apes have troops, beavers have families (or lodges, or colonies), cheatahs have coalitions, mallards have sords, mosquitos have swarms, and so on. These aren't just arbitrary designations; the characteristics of these groupings are what facilitate biological success among those species - the number involved, the customs they adopt, the relationships they form, the way they travel and love and eat and live and die together.

And what is the human grouping that facilitates success? The tribe is the social unit in which humans historically thrive the best. We are generally ill-equipped to successfully live on our own, and so we have always sought out support and community from our tribes, and until the last few thousand years, the idea of a human leaving his or her tribe to set out and live alone was relatively unthinkable. There are even studies showing that our brains aren't equipped to understand more than a certain number of individuals as fully developed, complex people, and that beyond that number, "the human brain must resort to some combination of hierarchical schemes, stereotypes, and other simplified models in order to understand so many people." [1] So, there are social structures - forms of community - in which we're biologically built to thrive, and which take some significant time to form well.

And yet we still walk away when we feel we have to, or sometimes just because we can. We justify it by thinking about what we are moving toward, and I don't deny that in some or even many cases, perhaps that richness and diversity of experience is something that will define the success of this version of the human being on our eternal timeline of existence. Our descendants may call it a marvelous turning point in the history of humans! I don't deny that some day I will want to leave a community I'm deeply rooted in just because it is time to go elsewhere, and perhaps for no other reason.

But still, hearing about those cases where someone bids a difficult or tearful goodbye to a community of friends or family or both for something as ephemeral as a job or a change of temperature or a restlessness for something different, I experience a sense of loss. I wonder what in the process we are doing to ourselves as a species and a culture, as we play so haphazzardly with the relationships and connections that are so important to our humanity.

One of these days,
I’m gonna sit down and write a long letter
To all the good friends I’ve known
And I’m gonna try
And thank them all for the good times together.
Though so apart we’ve grown.

What communities have you left behind? How did it turn out? How important is being a part of a "tribe" to you?

2 thoughts on “Why do we leave the communities that love us?”