John McCain's presidential campaign is making a big mistake with its television ads that continue to portray Barack Obama as, essentially, too much of a good thing. They reinforce the framing that Obama is a rock star, a mega celebrity, a dignitary on the world stage, and then expect that simply by calling our attention to the contrast between that persona and the image of a stodgy and reserved President who sits in the Oval Office making important decisions all day, they can sway the voters toward McCain.

The folks at Magnolia Pictures were kind enough to send me a reviewer's copy of the new movie about Hunter S. Thompson before it came out earlier this month, but I only recently had a chance to watch it. I kept putting it off partly because I didn't know enough about Thompson's life to get excited about the film over other ways to spend my time, but I'm glad that I got around to watching it.

Gonzo: The Life and Work of Dr. Hunter S. Thompson is part documentary, part tribute, and part lamentation on the state of the world. As a documentary, it put Thompson's life in the context of his times and honestly contrasts the larger-than-life myth of the man with the reality of his personal life. As a tribute, it uses a broad spectrum of interviews with friends, family members, business associates, and even foes to honor a life that was lived so fully, if not in line with what was expected of him. And as a lamentation on the state of the world, it puts the corruption and power struggles of early 1970s presidential politics next to the way things are done today, and notes that we've mostly gotten worse instead of better. (It certainly made me want to learn more about George McGovern's campaign and platform.)

END_OF_DOCUMENT_TOKEN_TO_BE_REPLACED 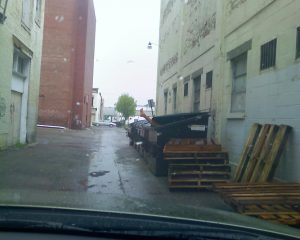 END_OF_DOCUMENT_TOKEN_TO_BE_REPLACED

On Wednesday this week, I experienced the great joy of being a part of what might have been Richmond's first 100-Mile Radius Potluck - where all of the ingredients in the dishes you bring come from within 100 miles of Richmond. It was a great success, with delicious food, good company, and a strong sense of possibility about how local food ties into building a more self-reliant Richmond.

You can view highlights from the event, which was sponsored by ProgressiveWayneCounty.org, in this YouTube video:
END_OF_DOCUMENT_TOKEN_TO_BE_REPLACED 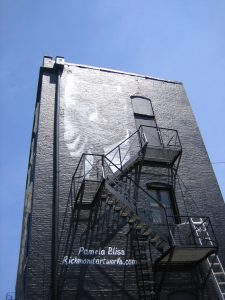 When you hang around with Jim Hair, you sometimes find yourself thrust into the middle of interesting artistic and cultural experiences you hadn't planned on. That happened today, when he suggested I be an interview subject in a news segment produced by NewsLink Indiana out of Muncie about the forthcoming party to celebrate the new Hoagy Carmichael mural that's gone up in downtown Richmond. And so I was, and you can see the resulting video and news story on the NewsLink Indiana website. The piece is apparently just a promo for a longer news piece they'll produce on Saturday, so my sound bite is notably short and unsubstantial. But at least they didn't include the part where the interviewer cleverly asked me how much I know about Hoagy Carmichael, and I had very little to say in response (I think she was on to me), but that also means they left out my brilliant musings on the harm of homogenous community landscapes and the importance of creating vibrant destinations with this kind of cultural and artistic work. Sigh.

You can view other coverage of the mural: Palladium-Item article, Flickr photos, YouTube videos, and so on. Congratulations to all of the people who worked hard to make the mural happen, and certainly to Jim for bringing everyone to the table, er, canvas.