I had a chance to watch the holographically generated performance by Michael Jackson at the recent Billboard Music Awards, and if you haven't seen it already and have any interest in such technology (or even just music and dancing), it's worth a watch:

Of course producers and special effects experts have been resurrecting and recreating performers, celebrities, actors and historical figures for some time now, so having the technology to make a deceased musician perform a new song live on stage is perhaps an expected (albeit impressive) next step in that process.

Still, I wonder if we'll reach a point soon where it might be helpful to have performers declare what advanced tools and technology are being employed to produce a given entertainment experience. Just as we label some of our food as having come about through one production process or another, maybe we will want or need an "ORGANIC" label for our live shows that meet some appropriate standard. 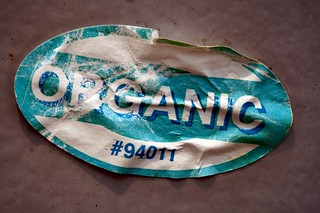 It's not that I think the use of technology to assist or even completely create a performance is bad. I have nothing against using holograms to create new and interesting images or using computer algorithms to create new and interesting sounds. And technically speaking, these accomplishments ARE the fruits of human endeavor, even if it's several layers of complexity removed from the already impressive ability to manipulate a guitar or navigate a complex choral double fugue. Even the most "unplugged" of modern musical performances are likely still using some microchips somewhere along the way.

But while some of the enjoyment of seeing a live musical act is just taking in the sounds that hit our ears and the visuals that hit our eyes, for me another level of enjoyment comes from appreciating the skill and struggle that an artist has encountered to get to that point. The creative process, the endless practice, the sometimes long undertaking of making the quirky human body look, sound, move a certain way. I can be moved at a live performance by the knowledge that the performer is exhibiting a hard-won level of technical expertise or demonstrating their ability to overcome adversity, even if the music or dancing or whatever isn't that amazing or life-changing.

So I think I want to know if my senses are being deceived in some way that means there wasn't that particular kind of human creativity work to bring it to me. Even if it's imperceptible. Even if it's perfect. And perhaps we will want our children and future generations, who are already blessed and cursed with a world where reality and virtually created things are blending together more seamlessly than ever, to be able to identify the difference between what goes into John Prine's fingerpicking and a resurrected Michael Jackson's holographic moonwalking. It may not matter to them (or anyone) in the end - I still eat plenty of processed, non-organic, chemically augmented foods after all - but the distinction still seems worth making somewhere along the line.

Are these the ramblings of a narrow-minded traditionalist out of touch with the times? Is it important to you to have advanced computer-enhanced performances identified as such?