This post summarizes the events of the first part of the second day of the Second U.S. Conference on Peak Oil and Community Solutions. You can read my introduction and my summary from the first day. As you'll note, there's quite a lot there, I hope it's not too discombobulated to be useful. I should note that the conference organizers are planning to produce a DVD of the various sessions held here, so if you're at all interested in seeing some of this stuff for yourself (and without my filters/bias), stay tuned to the conference website for details. 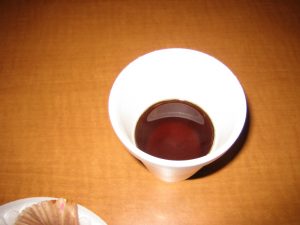 We rose bright and early (even more so because of the time difference) to have a continental breakfast and make it to the conference venue to secure reasonable seats, since most of the events take place in the same auditorium throughout the day. At the "call to order" this morning, the organizers noted that there were 450 people in attendance last night - wow! It's impressive to have this many people gathered, but I do have to say it's hard to miss the irony that in a conference centered around honoring strong communities and personal solutions, it's doesn't encourage a very "personal" interaction with other participants in such a large group, at least compared to other similar events I've been involved with. The tradeoff is worth it, I think, given the quality of most of the speakers today - good to have as many as folks as possible listening.

The first speaker was Steve Andrews, a Denver based energy consultant and writer (and cast member in the film The End of Suburbia), who's been involved in organizing a number of peak oil conferences and is planning a few coming up, including one in Denver in November. Steve walked us through the various alternatives to oil being proposed and their viability. He cautioned against spouting speculative predictions about the timeline and impact of peak oil, and made his point by showing a number of predictions from the 60s through the 90s (including his own) that have turned out not to be true (sometimes in a sigh-of-relief sort of way, and sometimes in a it-got-worse-faster-than-we-thought sort of way). Of note was Daimler/Chrysler's promise that they would have 100,000 fuel cell cars on the road by 2004 - didn't happen.

Steve referred back to the Hirsch Report that Richard Heinberg mentioned last night, and again affirmed it as the most important document/tool in convincing public officials to take this issue seriously. "Print it out!" he said. He also hinted that a particular U.S. governmental agency is actively but quietly looking at Peak Oil, and he's meeting with them in a few weeks.

Steve went on to talk about the various specific alternatives to oil that are on the table. His criteria for even considering a technology/resource as an alternate were 1) the solution had to acknowledge the net energy story, 2) it has to look at the potential equivalent quantities to match the energy provided by petroleum, 3) you have to be able to determine a timeline for deploying the technology, 4) you have to have an accounting of the barriers to implementing that technology, and 5) the environmental impacts have to be clear. He showed that, while most all of them have some positive contribution to make in some context, none are suitable as a true substitute. In particular, he noted that oil shale, which has been held up by a number of energy companies as promising, has as much energy density/output to offer as baked potatoes. Similarly, hydrogen powered cars, while a great technology, are a long way off - Honda says they're at least two decades away.

The next speaker was John Ikerd, an agrarian economist and author of Sustainable Capitalism, who also seemed to have a past life as a Baptist preacher. I have never seen or heard an economist belt out thoughts about current economic models, sustainable energy, and solutions toward a positive future in such a passionate and engaging manner. He was *on fire* as he talked, and I can't do him justice here, but I'll try to jot down a few of the things he said, which focused on the philosophies of sustainability (moving beyond the science that we'd been hearing about).

He said that the current dominant philosophy of industrialization is unsustainable; its fundamental principles revolve around productivity, always increasing inputs, outputs, profits and growth, and that this is by definition not sustainable. Sustainability focuses on permanence, balance, harmony - maintaining, restoring, and regeneratinig resources.

Ikerd noted that a key problem is the public's lack of awareness of "basic principles of thermodynamics," saying that an understanding of conservation/conversion of matter, entropy, dissipation would do wonders for improving the discussion and awareness of these issues. As a result, we're all fine with the fact that industry as we know it is so good at extracting energy, but not good at restoring it unless it can be re-used during the lifetime of the relevant decision-makers. Economics says that it's wasteful to restore energy - he suggested that we also apply this to human relationships and "social energy," too; just as industry tends to destroy quality of life in an environmental sense, he said we need to acknowledge the need to build positive restorative relationships with others, to have positive contact with other things that make up our environment. Ikerd was adamant that our knowledge of the lack of rightness of our relationship to others and our environments is itself something that diminishes our quality of life. "We're not sustainable as individuals, but we can be as a community.

Ikerd talked specifically about farming practices as horribly inefficient. He suggested that most of the energy in modern agriculture is lost in Confined Animal Feeding Operations (CAFO), and that if we got rid of them, production could go *up* by 50-100% if animals were raised in free-range settings. He said that sustainable agriculture can serve as a metaphor for the rest of society, as a nurturing way of managing natural living systems. The current system has no internal controls, and is a perversion of economic theories put forth by Adams and Malthus, who cared about ethics and relationships, but those aspects, said Ikerd, have been stripped from modern economics, which only care about numbers and the pursuit of wealth. The current economic system places no value on the future beyond 10-15 years - you can even buy the right to be unethical!

Ikerd said we *can* go back to where we went wrong and move forward in a new and positive way. He suggested that we need to look at the fundamental laws and policies that govern our society, and revise them so that future generations, which can't be present to fight for their interests, have equal rights. He said that the government reflects the people it governs, and so change must come in the hearts and minds of the people - fundamental change.

As I noted above, by the end of his talk Ikerd had built a crescendo to a full blown sweaty yell, and when he finished the auditorium erupted in applause. I think that even those who might have disagreed with any of his points would have still been applauding his energy and style alone.

I was also annoyed at the pervasive lack of communication skills when it came to asking questions during the various Q&A sessions. About 75% of the folks who stood up to ask a question A) didn't seem to care that they'd been asked to keep their remarks short, B) didn't listen to what other question-askers had said, often overlapping, C) seemed to see the time as an opportunity to introduce themselves and tell us their life history and get laughs, and then ask a totally unrelated question. This continued throughout the event and made those sessions, except for a few rare shining moments, rather un-useful.

The next speaker was Pat Murphy, Executive Director of Community Service and The Community Solution. Pat talked about "Global Inequity and Conflict or Community Solutions." I won't go into a lot of detail about his talk here, mostly because I'm exhausted and can't. In general he talked about the political and social context of various conflicts around the world related to oil (historical and present day) and how the current state of things in that regard is almost always making the peak oil situation worse. Pat believes that outright war that is explicitly over fossil fuels is likely in the near future, and that the results of this will be catastrophic. But Pat emphasized that we don't have to choose "armageddon," and that we can choose "Eden," by shifting world views, using fossil fuels less, becoming less dependent on automobiles, and rebuilding social relationships that we currently put aside for television and indirect/vicarious experiences. He specifically suggested that we 1) forget trying to convince *current* politicians to change and focus on becoming the future politicians, 2) forget trying to make inroads with the *current* corporations (he said all post 1980's CEOs are heartless) and build new responsible corporations instead, 3) forget the *current* American Dream and pursue a better one, 4) replace the current consumer society with a conserver society, and 5) we can't wait, we must start now.

Pat's talk was very positive, and despite offering some stark numbers and history about oil-related conflict in the world, his was a message of hope about the possibility of turning things around before it's too late. He reinforced this with lots of great personal stories and examples of communities doing just that.

After what had felt already like a full day, we broke for lunch. I'll say here that throughout the conference I met a number of people to whom I had various connections - folks who have hung out on IshCon.org, an Antioch student I'd met up with in Cincinnati while living there, another participant from Richmond, and some other folks who I recognized but couldn't place. I met Joe Schriner, who is running for president in 2008. Perhaps most surreal was meeting Trina Paulus, author of Hope for the Flowers, a book that was fairly important to me in younger years. She was wearing a "Hope for the Flowers" shirt and we ended up eating dinner together later!