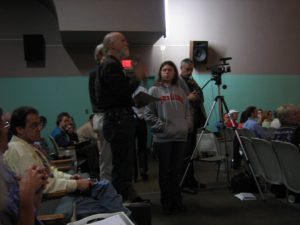 After lunch we gathered again to hear from Jan Lundberg, a former analyst for the petroleum industry (he published the well known Lundberg Letter, the so-called "bible of the oil industry") and now founder and editor of the Culture Change newsletter and website.

His talk was to be about "changing our lives and the direction of society", but I have to say that I'm not quite sure that he made it around to a central point. He talked about his history as an activist and some of his recent activities, and generally went on about the poor state of the world as a result of petroleum's role in it. He showed us a short Global Public Media film, "Our Synthetic Sea" (which you can view online). Lundberg's bottom line was "we need to abandom petroleum," and while I think a lot of folks in the audience resonated with his thinking, he didn't really give us a lot of new information or insight to chew on. (To be fair, he was the post-lunch speaker in a long day of speakers, and he didn't have any visuals, and the lights were low, and his voice was sort of deep, and....you get the picture.) A lot of the Q&A that followed was about "the collapse" - the event or series of events when modern petroleum based civilization can no longer support itself, and collapses. Folks wanted to know about how to deal with the chaos and nightmare scenarios they had dreamed up in considering what that event might look like. Here, Lundberg's answers were more positive and clear: if you can create a lifestyle for yourself now that uses less petroleum and brings you joy - through walking, biking, being more efficient, eating healthier, etc., then you will help to mitigate the pain of any collapse that does happen.

The next segment was a video presentation of "Peak Oil, Cuba and Community," a film that documents Cuba's response to its "artificial peak oil" experience after the fall of the USSR in 1990, when it lost 60 percent of its oil supply. The film was introduced by the producer, Faith Morgan, who was excited and emotional to be showing it to this audience. She noted that peak oil is something that we don't have a precedent for in the existence of humankind, and so we need examples that will guide us through it, and Cuba is one such example. The film, despite being unfinished and in need of some polish, was a great look at the cultural and structural changes that Cuba underwent as a part of this massive shift. It described the initial "special period," where there was a great deal of confusion and suffering and despair, and then walked us through the ways that Cubans have adapted and survived. Rooftop gardens, community building, mass transport, conservation, etc. were all impressive to see. The film was followed by a panel discussion about the subject and Q&A from the audience. I missed out on some of this as I needed a break from sitting in the same room all day long.

After a break, the floor was opened up to an "open forum," where the various participants could tell us about their background, interests, and questions. As I complained about from Saturday morning, there was still a general lack of sensitivity on the part of many people who rose to speak, thinking they each had 20 minutes to give us all a life history, when the forum facilitator (who was excellent in tone, phrasing, and method, BTW) had made it clear that they were to be brief and to the point. As a result, there were again a few nuggets of wonderful insight and questioning, but mostly it was a time to blurt something out and then be cut off, without much dialogue. Oh well.

After dinner, we had a really great presentation by Michael H. Shuman, author of Going Local, on "Buying Our Future: How Consumers Can Lead the U.S. to the Post-Petroleum Economy." (Pardon the irony of linking you to Amazon for that book - buy it locally if you can!) I found Shuman's talk to be particularly inspiring and motivating because it spoke to a lot of the issues and interests I'm dealing with in pondering the future of Richmond, Indiana, my local community. As with Jon Ikerd's talk, I'll just repeat the aspects of his talk I was able to write down, knowing you can check out his book for more.

Shuman presented two common mindsets that small communities tend to adopt when it comes to economic development. The first is "TINA: There Is No Alternative", which aims to bring a Toyota plant into its back yard, focusing on exporting of goods to a global alternative. The second is "LOIS: LOcal ownership / Import Substituting," which focuses on locally owned and operated economic entities and finding substitutes for good and services that might otherwise be imported. Shuman showed that, in the fight of LOUIS vs. TINA, LOIS tends to be a better deal. For one, TINA has a lower cost per job because of the enormous subsidies and tax abatements that are usually come with TINA.

Why is locally owned important, asks Shuman? 1) There tend to be little or no "destructive exits" with local businesses - an entity pulling up all its roots and extracting itself from the community. 2) They build long term wealth in the community, instead of shipping that wealth off someplace else. 3) Create higher standards of living - the locally owned entities have to be a part of rising labor and environmental standards (again, because they tend not to just exit when they don't like those rising standards). 4) Greater economic multipliers - dollars circulate internally, reducing the cost of doing business locally.

Shuman also talked about why self-reliant communities in the LOIS model tend to be stronger and better in the long run: 1) They are less vulnerable to sudden shocks / destructive exits happening as a part of the larger economy, 2) they tend to have more skills and diversity, which makes them able to adapt better to changing environments, 3) they can diversify their exports instead of being subject to the health of a single employer/producer/product, and 4) they are easier and cheaper to build and maintain. In the context of a post-petroleum economy, Shuman also said there were a few key ways in which LOIS would prevail, namely it serves as an inoculation against shocks coming from changes in oil production. As energy costs rise, TINA becomes less productive: distribution costs go up, oil costs go up, environmental impact increases, etc.

LOIS requires a couple of key kinds of initiatives. Find the leaks in your city and plug them - find the places where dollars are leaving the economy and where self-reliance can be increased...more local banks, home ownership, retail. Find training (higher education and supporting entrepreneurs), support local investing and purchasing, etc. He noted that most pension plan dollars are going outside the local economy, and suggested setting up programs to create shareholder interest in local businesses. These allow owners to exit gracefully when the time comes because the community has an interest in the continuance of those businesses, increases the value of the business for the entrepreneur, and increases accountability.

Shuman talked about a "hierarchy of purchasing", the guiding principle of which is encouraging, not requiring, folks to think about buying local, asking the question "could I buy an equivalent, good, comparatively priced product locally" before buying elsewhere. The specific hierarchy is:

He went on to make some specific recommendations for ways we can all as individuals work toward creating more self-sustaining local communities, the top three of which were 3) eat locally, 2) cut your automobile use in half, and 1) own your own home (or at least make sure your renter or mortgage lender are locally based).

Shuman's talk was received with standing applause, and there was an inspired Q&A session afterwards. I don't really think I did the talk justice here, but I've since obtained his book, and it looks to be a much better coverage of these ideas, so I'll refer you to it for more.

After a long day, they had set up an evening gathering complete with a wide selection of delicious pies baked by an apparently famous "pie lady" in Yellow Springs. A few of the presenters/participants played music together, but we didn't stay around too long after sampling the pie and catching up a bit with an Antioch student I'd met a few years ago in Cincinnati. We fell asleep soon after our arrival back at the hotel.