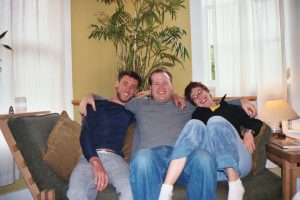 I've seen Matt's studio in Austin and I'm so impressed with the "handmade" nature of so much of what he does - music, carpentry and beyond. He's quite a guy. You can check out his website (which I designed) at dancingcarpenter.com; you can order a copy of his album Imaginary Muses from there as well.

And then, I made a New Year's resolution to stop drinking soda. Cola. Soft drinks. Fountain drinks. Carbonated beverages. Pop. Whatever you want to call it, it was time for me to give it up. It's partly because of the High Fructose Corn Syrup. It's partly because I can't get over how much power the soft drink industry has over the American diet and consumer habits in general, and I don't want to contribute in that particular way any more. And it's partly because there comes a time in one's life where one has to give up the things that one does not really need.

Now that a month has gone by with success, I feel comfortable officially saying farewell to my bubbly pseudo-medical friend and its peers. Oh, I still get the cravings now and then, and I still sometimes quietly wonder to myself if I wouldn't like to be a Pepper too. But those are just remnants of a former life, and I've moved on.