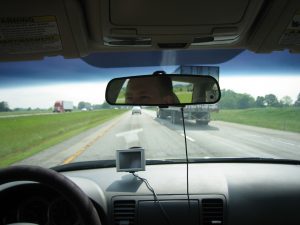 I don't usually read USA Today, but in doing so this morning I saw that there's a perverse new angle that some organizations are taking on the issue of U.S. immigration policy. It was manifested in an advertisement taken out on page 2 of the front section, with a single photo of a long line of traffic at a stop on an interstate highway. The text in the ad basically says that illegal immigrants from Mexico, in their unending contribution to the population here, are causing Americans to have to sit in traffic congestion longer than ever before. The call to action is clear: if you want your freedom to drive wherever you want whenever you want to remain intact, we have to keep those Mexicans out of our country.

Not surprisingly, the ad and the related propaganda from its sponsoring organizations like the American Immigration Control Foundation and the Federation for American Immigration Reform continues the trend of dehumanizing people trying to immigrate to the U.S. from Mexico. With language that minimizes the social context and pumps up the fear factor ("we don't have the capacity to assimilate the newcomers"... "adds a large burden"... "excessive legal quotas"... "lawlessness"... "threatens the American way of life"...), it encourages us to forget about why someone might be immigrating, or what happens to them once they get here, and instead focus entirely on what an inconvenience it might be to our daily lives. "I don't want to sit in traffic any more than I need too, not with gas prices the way they are! Darn Mexicans!"

But more disturbing and a bit more surprising to me is the attempt to tie something like traffic congestion to a single factor like the number of people entering the country illegally over the Mexico border, and to brazenly suggest that we can hold off traffic congestion just by addressing that issue. They even go on to suggest that economic prosperity in many southern cities is threatened by traffic congestion because it makes it harder to attract new business. Oh, and it's an significant environmental issue too...the immigrants are basically choking the spotted owl with their own bare hands.

This is too much. I understand that for many political players, they know they can't win an argument about an issue unless they force us to look at it at such a macro level that removes all notion of humanity and relationship from the picture. But to plant the insidious seed that uses the difficulties that come with higher oil and gas prices and the ridiculousness that is the U.S. transportation system and car culture against the people who wish to cross our borders is a kind of twisted tactic at a whole new level.

Of course, since so many people in this country do externalize the responsibility to make our daily commutes faster, cheaper, easier, this tactic just might work. We want the government and other entities to "do something" about gas prices, about traffic congestion, about economic vitality of our cities. If the magnifying glass focuses in on a single factor that can be addressed with such apparent ease and moral clarity ("just shut down the border...it's our country!"), we might just latch on to that and run with it.