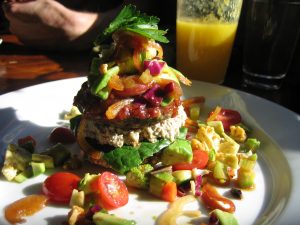 Two years ago about this time I blogged about my resolution to give up soft drinks, which I'm glad to say I've successfully continued for a second bonus year, despite it having no noticeable positive effect on my health while making me an outcast at all of those cola-centered social gatherings. And despite the bottles of Dr. Pepper that people sometimes leave sitting around me, sometimes even in my own fridge.  But I digress.

For now I'll skip over last year's resolution - which failed miserably - and bring you to my 2009 resolution, which is to eat less meat. Specifically, I'm trying to eat meat at no more than two meals per week. This is a revised plan of attack from past attempts to try an all-vegetarian diet, which I eventually decided wasn't tenable for me.

Without getting too far into the food ethics involved in meat-eating (which are nonetheless important and deserving of further treatment), I thought I'd note why I'm doing this, and how it's going so far:

How's it going after a month? Well, mostly so far so good, but definitely with some complexities:

To be clear, I'm not at all prescribing vegetarianism or any particular diet as the right or wrong thing for anyone else, I'm just talking about what's right for me.

As Jim C. noted two years ago, I have to be careful of "quitter's righteousness" here, and not let a month of relative success go to my head. That's partly why I'm blogging about it - if you dine with me or see me on the street, feel free to ask "how's that meat twice a week thing going?"  I will hopefully give you the thumbs up sign, but I also might pretend I didn't hear you and avoid eye contact.

If anything, this resolution is helping me to balance an increased attentiveness to what I eat (and the health/environment/social implications of that) with a desire to remain a little more flexible than quitting cold-tofurkey, and to try a personal change of habit that's not so dramatic I can't sustain it.

7 thoughts on “Meat Twice a Week”