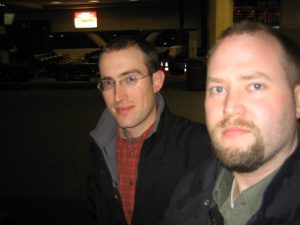 Sometimes you see those weather stories on the evening news where they show a few seconds of airline passengers stranded in some airport looking like hell as they try to figure out how to cope with canceled or delayed flights, and usually you just feel a little bad for them and then move on. At the moment I'm feeling some appreciation for the misery that's displayed in those brief clips, having had a bit of a travel adventure myself:

It started with Mark and I barreling through the snow on I-70 toward the Dayton airport, wondering if planes would even be taking off at all today. But, my handy dandy text message updates from Delta.com declared the flight was on time, so we pressed on.

I should have known we were in for a special time when the guy at the ticket check-in counter (which has largely been replaced by self check-in kiosks) was delighted to point out how much cost cutting Delta has done. Me: "Do you have one of those little folders for these boarding passes?" Him: "No, they did away with those some time ago. Heck, all we've got left now are the airplanes! MUAHAHAHAHAHAHA!" Right.

Then the security checkpoint for, as Bruce Schneier accurately calls it, "Security Theatre." But, I'd done my homework and had minimized my liquids, left all but my car key in the car, worn socks without holes in them for the taking off of the shoes, etc. And that went fine.

So we get on the plane and we go out to the de-icing area where they pour two different chemicals on the wings, one pink and one green, over a 15 minute period. Then we taxi out to runway 26L, rev up the engines, and start rolling. And then the engines are revved down, and back up again, and then down, and we start taxiing off the runway.

"Ladies and Gentleman, this is your captain from the flight deck. I'm sorry to be the bearer of bad news, but we got a little message on the error display here right before takeoff, and we decided not to take a chance. I'll get on the phone with maintenance in Atlanta and keep you posted."

"Ladies and Gentleman, that issue has cleared itself up, and we're all set to take off again."

So we get deiced again, and we're now about 50 minutes past our scheduled takeoff time, making Mark and I a little nervous about our connecting flight. We taxi to the runway, rev up the engines, and start rolling. And then the engines rev down, and we taxi off the runway again.

"Well, apparently that issue wasn't cleared up, and we got the error message again, so we're going to go back to the terminal. Something about a problem with the left engine."

Thank goodness for some engineer somewhere who built an error message system that didn't just flake out and report a problem one minute and then not step up to report it the next.

About an hour and a half past our original departure time, we're getting back off the plane, and then standing in line at the gate ticket counter to see about a rebooking of our connecting flight. Delta.com texts me to say that the flight's new departure time is 3 PM. Then they text me to say that it's canceled. And then the pilot announces that the flight is canceled.

Right. I asked MattJ in my office to call Delta and find some alternatives while we stood in line. Just after that, the Delta person said "we've checked with all of the other airlines, and they have no seats available. Oh, and also, there's a bunch more snow coming, so if you don't get out of here today, it will probably be tomorrow afternoon before flights will go again."

It turns out, then, that the best possible solution for getting to San Francisco today was for Mark and I to drive to the Cincinnati airport about 1.5 hours away, and fly directly from there. So we rounded up our bags, walked out to the parking lot in the snow, and...found that my car key was no longer where it was supposed to be in my pocket. Gone. We looked in the snow that had accumulated around the car, nothing. Locked out, cold, bags getting soaked, I mentioned that maybe it fell out in the security line.

Mark was off and running back into the airport to look for the key there (glad that he'd brought his running shoes), while I navigated the 37 phone menu options for the Dayton airport to see about a locksmith of some sort. After taking approximately zero measures to insure Mark was the rightful owner of the key, the TSA handed it over to him, it apparently having fallen out when I disrobed while being scanned.

So then we drive to Cincinnati in the blustery snow, and finally get on another plane. I couldn't believe that a few hours earlier we'd been on a runway, ROLLING DOWN IT, and still hadn't been airborne. Twice. Oy.

It was a long flight, and the apparent "innovation" of each person getting a touch-screen television system on the headrest in front of them didn't make it any better...the glow of passive entertainment engulfed us all as we traveled across the country together. At least there was someone a few seats back clipping their nails at various points throughout the flight, that was REALLY pleasant.

Okay, enough ranting. I'm happily on the ground in San Francisco now, with a place to sleep, a delicious PLANT burger in my belly, and an exciting couple of days ahead. Here's hoping that all of the ridiculous travel adventure was front-stacked, and that the rest of this trip is boring in that sense.

2 thoughts on “The one where the plane failed to depart, twice”