Tales of my recent encounters with two newspapers of note, The New York Times and The Palladium-Item: According to The New York Times website, home delivery of their Sunday edition is available where I live in Richmond, Indiana.  Earlier this year I tried to take them up on that, buying a subscription online and eagerly awaiting that first Sunday morning when I would get to indulge in a paper-reading experience long enough to get me through at least one cup of coffee.

But that first Sunday, the paper didn't show up.  "Oh, yeah, that's probably just some issue getting you in the circulation system," the phone rep said when I called.  "We'll get it to you next week."

Week two, no paper.  "Sorry about that, don't know what happened there.  Hold on while I call the distribution center."  They concluded it was just another circulation issue, and assured me it had been straightened out for sure this time.

Week three, no paper, and the phone rep was equally apologetic, but had no additional routes to pursue.  "Let me make sure I understand," I said, "you theoretically offer home delivery in my area, but in my case, there's nothing you can do to make that actually happen?"  The best she could do was offer to put a manager on the phone, but then when she tried to do that, she said all the managers were busy at the moment, and so one would have to call me back.

I cancelled my ethereal subscription and abandoned all hope of that particular luxury for now. But it seems worth noting that with newspapers fretting day in and day out about attracting and retaining readers, the least that one like the New York Times could do is coordinate their circulation operations to put a paper in the hands of people ready and willing to pay for it. If that part of the business model is falling apart, I think that puts them somewhere between "not likely to prosper" and "doomed."

I don't take any pleasure in making that assessment.  Apart from still longing for a leisurely Sunday morning paper-in-hand experience, I long for a time when the hard work that goes into high quality journalism is again appreciated and valued enough that papers like The New York Times and even my local Palladium-Item can again be a centerpiece of public discussion.

It was fascinating to watch the film Page One, which documents a few days in the life of The New York Times and its staff as they talk to sources, discuss angles on stories, bid goodbye to laid off co-workers and consider the future of their industry.

The film is part love letter to what The Times has been, part behind-the-scenes chronicling of how the paper is made, and part rumination on the possibilities for what will become of the newspaper in the age of the Internet.  It's narrated by NYT reporter David Carr, who is fiercely protective of the paper's reputation and role in society, and Page One doesn't apologize for portraying The New York Times in an overall favorable light.   The few times when its fumbles and failures (Judith Miller's Iraq WMD reporting, the Jason Blair scandal, etc.) come up, they're quickly swept into the bigger picture of how all the good it does outweighs those unfortunate course corrections.  But even with that bias, it's a great  look at the roller-coaster ride of producing a modern print newspaper.

In April of 2010 I took the time to post here about why I was canceling my print subscription to The Palladium-Item, Richmond's daily newspaper, and so it's only fair that I take some time to note that I re-subscribed early this year and have continued my subscription since.  A few things happened to prompt that:

The first was that I was running for local political office for much of 2011, and it felt important to see the print edition of the paper as everyone else would see it - the prominence and layout of news articles, the placement of photographs, the political ads (mine included) sprinkled throughout.  This was quite useful, and a number of times it meant that I could see how the political coverage was coming together in ways the online version of the paper didn't necessarily show.  (As I've said elsewhere, I also think the Palladium-Item did an outstanding job covering this election, devoting significant amounts of their already strained resources to provide voters with unprecedented levels of information about candidates...that alone feels worth having supported.)

Second, Kelly noted one day that when she only reads the paper online, there's much less of a sense of knowing what's going on in the community.  This is ironic given that there's probably more information about community events and happenings online than there ever can be in the print edition, but I agreed with her that the experience of serendipitously encountering an upcoming play, fundraiser or art show is much more intact while turning the pages of the paper than it is when browsing a website.  You have to do a lot of clicking and scrolling to find the same information online, and there's still some value in the editorial and even pay-for-visibility processes that go into raising something to visual prominence within a finite amount of space.

(I should note, too, that there are times when some content from the print edition of the paper can't be found online at all.  I saw this firsthand a few weeks ago when they were able to publish in printed column form my observations on the closing of Really Cool Foods, but because of some licensing issues, it couldn't be redistributed online.  But the print edition readership is attentive - I had a lot of people coming up to me for days afterward to mention the column.)

Third, one of my reasons given for canceling my subscription last year was the relative chaos and toxicity of the public conversations happening on the paper's website comment sections, and they've since addressed that to a large degree.  Just this fall, the paper switched to using Facebook for story comments, which requires commenters to use their real name (as governed by Facebook) while still leaving the option for anonymous users to share their views elsewhere on the website.  Yes, there are plenty of privacy concerns that come with depending on Facebook for this function, but in this case I think the benefits outweigh those concerns. 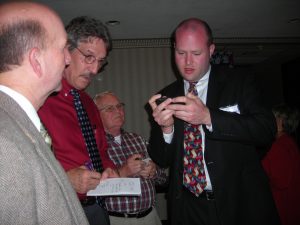 Lastly, over the year I've just come to have a new appreciation for the role a daily newspaper plays in the life of the community, and the role that the Palladium-Item plays in the life of Richmond and Wayne County.  In the past I think I've blamed some of the lack of debate or civic engagement in our community on the paper's own choices - what to cover, how to cover it, etc.  There's no doubt that those choices make a difference, but I've also come to see that the choice not to be engaged in public life is unfortunately one that many members of this community make for themselves on a regular basis, and no amount of great reporting or special features are going to change that alone.

Further, if I imagine a day when the Pal-Item announces that it is closing its doors, I can only see Really Bad Things that stem from that when it comes to our community's ability to address the challenges in front of it.  In the past I might have thought that citizen journalists or some of the other less formalized news-gathering efforts in town would step in, but my recent experience is that Richmond doesn't nearly have the critical mass of people and platforms in place to really make that work.  So even with limited financial and personnel resources, even with an over-dependence on advertising, even with editorial or coverage choices I might disagree with, a functioning daily Palladium-Item is a much better thing for Richmond than no paper at all.

My concerns and suggestions from past critiques still stand; I still hope the paper (and the industry as a whole) is able to move toward a model that blends print and online editions more seamlessly, that allows me to pay money to see fewer advertisements, and that continues to provide unique value through a focus on in-depth local reporting and commentary.  I'm even looking for ways to personally contribute directly to that focus - more on that later.

But for now, I'll continue supporting the existence of the Palladium-Item with my subscription dollars and appreciating it as a unique link to the place I live.

What's your current relationship with your local paper?  And can you drop your copy of the Sunday Times off at my house when you're done with it today?