Despite recent attention to the implications of giving Facebook full access to our online lives, I don't think it's shifting the average person's thinking about their use of a centralized, closed-off version of the web. For most people, the affirmation that there is no real alternative to Facebook doesn't mean they leave Facebook, it means they keep using it until something else comes along.

Of course, there is an alternative to Facebook and other walled gardens: the open web. The alternative is the version of the Internet where you own your content and activity, have minimal dependence on third party business models, can discover new things outside of what for-profit algorithms show you, and where tools and services interact to enhance each other's offerings, instead of to stamp each other out of existence.

But most users don't care about the principles or implementation of an open web, at least not in those terms. Most people don't see themselves as ever having left the open web behind, and if you told them to try to get back to it, they wouldn't know what to do or why it was worthwhile.

No matter how much it might be in their long-term self interest, it's not up to the casual Internet user to figure that out. Instead, it's up to the developers, designers, entrepreneurs and technology leaders to create a version of the open web that also happens to be the best version of the web.

END_OF_DOCUMENT_TOKEN_TO_BE_REPLACED

My recent post about owning our digital homes prompted some good feedback and discussion. When I talk about this topic with the people in my life who don't work daily in the world of websites, domain names and content management, the most common reaction I get is, "that's sounds good in theory, I'm not sure where to start in practice."

So, here are some of the basic things that pretty much anyone can do to get started having and owning your digital home.

On the Internet, your domain name is the root of your digital existence. It's the address on your home, your entry in the phonebook, the shingle you hang out so that anyone and everyone can find you. While the domain name system (DNS) has changed a lot over the years, it's still the starting point for establishing a long-term presence on the Internet that you control, independent of other tools, services and providers you might use.

My domain name is "chrishardie.com." It's not only the URL/address of my website, but it's the domain where my primary email address lives. Whatever content management tool might power my website at any given time, and whatever server my email might live on or whatever email program I might use to read messages, I will always have my domain name to point me and others to those places.

Having a domain name is relatively inexpensive; in most cases it's $10-15/year, less if you register it for multiple years at a time. When I see people who pick email addresses derived from their Internet Service Provider (e.g. Comcast, Verizon) or from some free online email provider like Gmail, and then see the time it takes them to inform friends, co-workers and family when they change that address to something else, I know it's worth those few dollars to have a consistent address that doesn't change unless I want it to, and that doesn't depend on someone else's business model to exist at all.

In my opinion, your domain name should be something personalized, but not so specific to where you live, how you make a living, or what you find interesting right now that it will become outdated when you move to a new place, change jobs or update your interests. Your domain name doesn't even need to mean anything at all, as long as it's memorable enough for you and the people you share it with. If you're having trouble finding a domain name you like, this generator will help with some ideas.

END_OF_DOCUMENT_TOKEN_TO_BE_REPLACED

Over the course of my life, I've built few things that reside permanently in the physical world. There's a small foot-bridge over a winding creek a few miles from where I live that I helped to bolt together. There's a school building in southern Alabama whose ceiling joists I helped frame in. I weathered a few splinters to help build the deck on our house. A few half-finished knitting projects linger. I've installed a window here, hammered some metal in a forge there.

Beyond these and some similarly inconsequential offerings, most of my life's work and creations have come in the form of things published in the digital world: essays, photos, lines of code, blog posts, songs, podcasts, and database rows. Where a carpenter might wander the streets of his city admiring the houses he built, I must wander the hard drives, websites, .zip/.tar archives and code repositories of my world to remember what I've created.

Where these digital products of my life and work reside, who has control of and ownership over them, and how long they might persist is important to me.

This is why I try to use this site, chrishardie.com, along with a few other carefully chosen services to make up my digital home. It's part of why I love WordPress as a tool for publishing. And it's why I worry about others who take for granted that the digital things they create will always be there, accessible, under their control, searchable/viewable in a way that makes sense to them.

END_OF_DOCUMENT_TOKEN_TO_BE_REPLACED 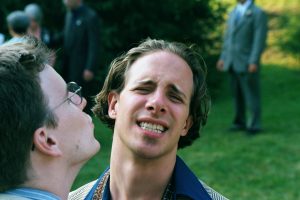