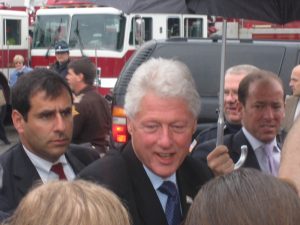 I spend a lot of time on this blog and elsewhere encouraging people to avoid ceding too much power over their lives to the individuals who would claim it for the wrong reasons (or in many cases, claim it at all), or to institutions and organizations that may not truly have our best interests in mind. But despite my own wariness of those things and of participating in a superstar celebrity culture, it's still pretty hard to ignore the excitement and intrigue that follows around a former President of the United States. This is amplified when he appears in a place quite unexpected, like Richmond Indiana.

The news came in on Monday that Bill Clinton would be making a stop here for his wife's campaign for the Presidency. For each person to whom I spread the news, the reaction was, "wait, he's coming HERE!?" The city sprung into action and rolled out the welcome mat. The media and bloggers built up the anticipation and excitement as details of the visit emerged, though for some it was still a "I'll believe it when I see it" occasion.

And then, shortly before 4 PM, with snipers looking down on us and rain steadily pouring, Clinton's motorcade pulled into the parking lot of Fire Station #1. He worked the crowd, walking deep into it and engaging each person warmly, if only briefly. Photos flashed, agents controlled the crowd, books were signed. Call after call was made to loved ones not present, "I just shook Bill Clinton's hand!" and "I'm never going to wash this hand again" and just "Wow, oh my gosh, I can't believe it." Laughter, chattering, smiles, shouts, strangers gathering around the spectacle.

And then he spoke in the crowded firehouse, handing over words he didn't need to come here to deliver in person because they're the same words he handed over earlier that day in Lawrenceburg, IN and that he would hand over later that day in Fort Wayne, IN. But the crowds still cheered and gawked and tittered about. And then he was gone, and I doubt he'll remember much about Richmond after a while.

I won't be voting for Hillary Clinton, and I'd be somewhat embarrassed if a visit from her husband had any significant impact on my thinking. I suspect that a significant portion of people who came out to see him might feel the same way, or have perhaps even been among those who actively decry the Clinton legacy and their politics. But that didn't stop us from coming together around a historical figure in the life of our country, and one who still makes international headlines today. In some ways, it was almost as if we got some of what we were looking for in our bid to host a Presidential Debate, but without the multi-million dollar price tag.

And now we can go back to work, back to life, back to looking at our own community and how to make it better with the resources we have here. But maybe those moments of excitement will inspire us a bit, help us think a little more highly of ourselves, show us that greatness doesn't have to be as far away as it might sometimes seem.

Of course, if you missed the visit, there's all sorts of coverage: the Palladium-Item has done an excellent job covering it from all angles on a very short turnaround time, with photos, video, audio, blog entries and more. A number of us took our own photos and posted them on photo sharing sites, including Hopi, Jim, WayNet, Becky, and me.

Thanks for the visit, Mr. President.