Skip to content
2011 City Council Campaign
This post is part of a series:
For more of my commentary on life in Richmond, Indiana check out RichmondMatters.com.
This post is more than 3 years old. 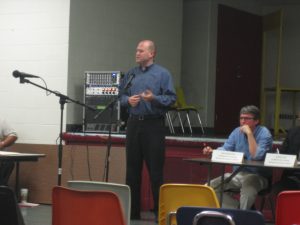 On the matter of hope, I said that we're living in a world where hope is hard to come by globally, as economies decline, fuel prices rise and the gap between rich and poor grows larger, so it makes sense that the tension and uncertainty in the air is here in Richmond too.  But I think that every community has an opportunity to redefine what makes it hopeful.  We can shift from a culture that suggests you find hope in wealth, cool products/gadgets/clothes and defining yourself as a consumer to a culture that finds hope in the relationships we build with our neighbors and families, the way we treat other people, the way we care for those in need.  If we can show that hope exists in our humanity and in people instead of in economic indicators, I think we can model a life that our community members - especially young people - will find more hope in.

On the matter of empowerment, I agreed with Toivo that this is an area that City Council has done a disservice to the community, especially around the matter of the defunding of the Human Rights Commission.   As I said last night, you can argue the point of whether or not we need a government-funded HRC - that's fine - but it should have been a two-way conversation that reflected a serious engagement by Council members with the perspectives and viewpoints brought by members of this Community.  Instead, it was a one-way conversation, with most members of Council agreeing outside of public meetings how they would vote and then not responding to the many concerns, questions and pleas for dialog that came from their constituents.  There are few things more disempowering than to feel like the elected officials who represent you at a local level - where the impact is felt most directly - are not listening, not willing to talk through the nuances of an issue, in some cases not even willing to respond.

I really appreciated Toivo's question, challenging as it was.  My particular hope today is that voters here continue to push candidates for office with such thoughtful and relevant questions.  It's good for us, and it's definitely good for Richmond.

3 thoughts on “Our 'insufficient' answers about hope”