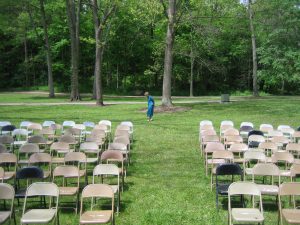 END_OF_DOCUMENT_TOKEN_TO_BE_REPLACED

I am hesitant to write more about the conversion of Hayes Arboretum land into commercial shopping space - so much has already been said. But I feel compelled to point out my sense that Richmond, as a community, is finding some good in a situation that, for a while, only seemed to have negative feelings and outcomes attached to it all around. Indeed, I am hopeful (perhaps naively so) that it may serve as a turning point in how we shape Richmond's future.
END_OF_DOCUMENT_TOKEN_TO_BE_REPLACED

The editorial cartoon in today's Palladium-Item depicts a lone protester standing in front of an imagined future strip mall in Richmond, with an onlooker suggesting that the protester get on with his life. It's a poignant visualization of one of the destructive attitudes that plagues this town and many others like it: "what's done is done, no use in whining about it, move on and make the best you can." At first glance this might seem to be an admirable approach to use with the difficult issues we all encounter in life, but some Richmond residents and decision makers often apply it pre-emptively to matters where there are still complex choices to make, nuanced options to ponder, and opportunities to seek alternatives for the betterment of our community. The logic is circular: because something might be so, it must be so.
END_OF_DOCUMENT_TOKEN_TO_BE_REPLACED

My friends Glen and Donna Lawrence have teamed up to help me to come to an important and tragic realization: that I'll never be able to get a job at the new Frisch's Big Boy planned for location here in Richmond. You know, the one I pledged never to visit. Worse, my FAMILY won't ever be able to work there! WHAT HAVE I DONE? I didn't realize that boycotts can work in reverse!? I have crippled my children and my children's children, and all those of the 319 other people (to date) who have made the same pledge! I had dreams!

(Sorry, I couldn't resist. Anticipating that there will be other similar responses, I promise not to blog about each one.)

The personal commitment I made late last week to boycott stores that might develop on the Hayes Arboretum land here in Richmond has gotten a bit of attention. The signatures of folks who share my commitment have been coming in steadily, with more than a hundred after just a few days. Bill Engle from the Palladium-Item called yesterday to interview me about the petition. He was friendly and understanding, but he seemed to have a hard time figuring out why I wasn't better fitting what I suspect was his profile of an "angry activist," which I'm not. Perhaps it would have been an easier story for him to write if I'd just chained myself to a tree? He did note that he was glad we weren't actually attacking the institution of Frisch's Big Boy itself...I take it he's a fan.
END_OF_DOCUMENT_TOKEN_TO_BE_REPLACED

In June of 2003, the folks who manage the Hayes Arboretum here in Richmond announced their plans to sell 33 acres of the Arboretum that runs along the main National Road in Richmond for commercial development...another strip mall, ugh. It was recently announced that the first three tenants signed on to the planned development are Menard's, Walgreens, and Frisch's Big Boy. I usually avoid activism of this sort, but I've launched a petition, where the signatories have pledged not to spend money at these locations or any other retailers that might locate there. The full pledge is below; please consider signing if you agree.
END_OF_DOCUMENT_TOKEN_TO_BE_REPLACED