Every time I go on vacation or get a little bit of time to step back and think, I end up making long "to do" lists for myself.  The lists are about projects I want to start, books to read, things to learn about, people to get in touch with.  It's common for some significant chunk of those lists to be related to how to make my home, Richmond Indiana, a better place to live, work and play.

At the same time, I recognize that other people are out there coming up with their own ideas about how to make Richmond better.  I hear those ideas mentioned at meetings, in casual conversations, in planning documents, and all over.  Sometimes I hear people talk about idea overlap - how something they thought was a new idea was something someone else had worked on in the past.  And then I start to worry that we might not be fully honoring the collective brain power we devote to improving Richmond, and I wanted to create a resource that would allow for some consolidated storage of all of those great ideas.

Thus was created the concept for a new website I launched this week, Richmond Brainstorm.com.  It's a place where people can submit their ideas for how to make Richmond better, and discuss the ideas already on the site.

END_OF_DOCUMENT_TOKEN_TO_BE_REPLACED

One of the weird things about blogs is that, as much time as people put into creating interesting and useful content for them, it's rare that anyone goes to the trouble to read back through older entries unless they're really looking for something specific, or are otherwise very committed to the content.

I don't expect that most of my readers here will bother with browsing through archives just for the fun of it, so I already make available a couple of topic-related mechanisms to find what you're looking for: the list of post tags (visualized in the image shown here), the category tree, the search form, the list of top-rated posts, etc.

Today I'm introducing another way to get to my core content, an index of my signature blog posts. This is a list of my more substantial and well-considered essays on a variety of topics, and I think it represents well the thinking and writing I've done on topics I'm passionate about. I'll try to keep it updated regularly, and I hope you find it useful. 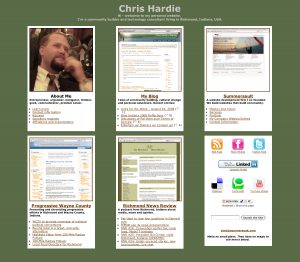 Those of you who follow my blog may not always bother to check in on the other parts of my personal website, which is understandable since they're much more static than the weblog. I do try to use the actual home page of the site as a fairly current jumping off point for various other projects, events, and adventures I'm involved in, and today I launched a redesigned version that organizes all of that a little bit better. It also has a photo that reflects the facial hair experiment I'm currently participating in.

The only major content component that didn't come over from the old design is a sampling of my Flickr photos, but I didn't get the sense anyone was really exploring my photography through that channel, and there's still a direct link to the photo stream on the new page. And, I added direct links to a lot of the other sites/tools where I have content or information posted.

The old design is preserved for posterity. I welcome any feedback.

Why have a personal website? Isn't it just an excuse to show off pictures of your cat, your significant other, a great poem about cheese that you wrote last week? Well, some of them are just that, and I strongly oppose the use of internet bandwidth for the sole purpose of showing off household pets.

However, there is a largely underutilized potential for the personal website that I'd like to comment on. As I see it, a great deal of the world's problems are derived from a severe lack of communication, a lack of human understanding amongst one another. Just think, there are 5 billion people out there that you don't know; you don't have any idea where they came from, what they're like, where they're headed. You just assume they're pretty much like you and that they'll get along okay without you.

That's not the case. We go to war because we assumed someone was like us and they turned out to be too different. People die because we assume they'll be able to support themselves while we enjoy extreme affluence. Because our field of significance extends only to our family, friends, and the people we "know", we have a very narrow concept of how the "world" is.

The personal website is a great solution to this. Our stories, our interests, our problems, our joys; they make up who we are and when you can share in someone elses, you've suddenly broadened the field of people who are in some way significant to your life. If you can learn about people and what makes them tick, you're a lot more likely to know how to fix the problems that get the world down. You might even learn something about yourself.

The web and internet in general have an enormous potential to change our world, a hundred times as much as it already has. I've encountered people from all over the world I wouldn't have otherwise known about; we might not speak each other's language, but through this incredible technology we can learn about each other, appreciate each other, and openly and directly share the common bond of humanity.

The plunge is worth it. The vulnerability pays off. The potential for getting to know your world is unimaginable. Publish yourself.