I'm just getting started with developing applications for the iPhone / iPod Touch, and one of the first real hurdles I encountered was that Apple didn't make it easy by default to use their iPhoneOS SDK on non-Intel Macs. With some Googling around I was was able to find a variety of articles that mentioned workarounds, but the comprehensive solution was spread across lots of blog post comments, forum postings, etc. So, for my own reference and hopefully as assistance to anyone else who might be in the same boat, I'm consolidating the steps here.

END_OF_DOCUMENT_TOKEN_TO_BE_REPLACED 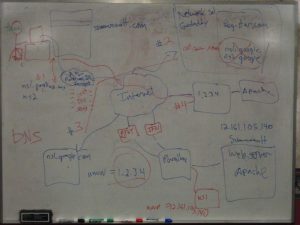 I'm looking for one of those lamp/appliance timers I could plug my computer into that will do the following during times when I really need to focus:

I asked about this at the local consumer lighting store, and they didn't have one. Searches on Amazon have been fruitless so far. Surely Linksys or Belkin make something like this? Anyone?

(This is a repost of a comment I made on macosxhints.com a few months ago, as a part of a discussion on blocking Internet access to avoid distractions.)

Presenting: another epic saga of wireless phone company incompetence...bear with me.

I'd had my Sprint cell phone and plan since 2001 - six years of relatively problem free operation (minor billing annoyances aside). And they recognized that I was a loyal customer who always paid my bill on time - in recent years they regularly sent me offers to "upgrade my plan" or my phone and receive a billing credit (but we all know this is because they wanted me to renew my vows and sign on to a new contract).

Recently, I decided that I wanted to look at a phone upgrade. 6 years had taken its toll on my Samsung A500, and I was excited about the possibility of a phone that would better sync up its contacts and calendar with my computer. I had asked Slashdot about such a product a few years ago, but the offerings were much more promising now.

END_OF_DOCUMENT_TOKEN_TO_BE_REPLACED

There's a whole lot o' switchin' going on. I spent some time last night helping one of my recently-moved-in housemates, Damon, set up his new PowerMac G4, which is his first real experience with Mac and OS X, coming from the world of Windows. I was able to re-live my own excitement of that first switching boot-up a few years ago, and as I took him on a tour and showed him New Ways of doing things (including the Firefox browser) our session was filled with Damon exclaiming things like, "you mean, that just works?" and "oh my gosh that's pretty" and "I'll never use another f#@$@! PC again". Okay, so maybe I said some of those things too. 🙂 And then this morning as I was listening to NPR, the 7:50 story was about the increasing popularity of Apple, Macs, and the rumors that bubble up around the forthcoming Macworld Expo. The 7:56 story was about Firefox, the browser that I use exclusively these days because it is faster, better, and helps me browse ad-free...it really does everything I want it to (a surprisingly recent development in the world of browsers from my standpoint). The NPR story used the key phrases: "open source movement" and "eating away at Microsoft's market share". It's fun to see smarter/faster/better at work and taking hold in a world that often prefers mainstream-but-broken.