If you read today's Palladium-Item article detailing the recent attempts by Richmond's City Council to gain more representation on the Economic Development Corporation's board of directors, you might be a little confused. I certainly was.

On one hand, you've got the City painting a picture of being left out of the key parts of the relationship the EDC has with its Richmond constituents, having to fork over $730,000 without appropriate representation.

You've got a County official noting that the City is as well represented on the EDC board as the County or other entities, and that things are working just fine as they are, while the Chamber president notes that there may be a conversation to be had, but that the current actions being taken are too poorly timed.

What's going on here?  Everyone seems to be making reasonable statements on the matter that represents the point of view of the entities they serve, but it sounds like they're having the conversation with each other for the first time on the pages of the newspaper. ARGH!

END_OF_DOCUMENT_TOKEN_TO_BE_REPLACED

If you're a reader of Earlham College's weekly paper, The Earlham Word, you'll note a quote attributed to me in a recent article about the future of the Clear Creek Food Cooperative, where I currently serve on the Board:

The Co-op has always been associated with Earlham, from the time it was started by a group of students in the Runyan desk.

To the contrary, the Co-op was actually started inside of a storage bin. At some point when it got big enough, the organization moved into the largest available compartment of an end table, and then worked its way up to reside in a desk in Runyan Center, but not the desk we know today as Runyan Desk. These details are important.

In all seriousness and despite the misquote, the article touches on the key point that the future of the Co-op, currently located on Earlham's campus, is a bit uncertain right now. As we try to figure out what model is best (and sustainable) for the organization, the Earlham populations it serves, and the larger Richmond community, we invite feedback from others who are invested in the future of a locally owned food store that focuses on healthy, local, organic products and cooperative values. 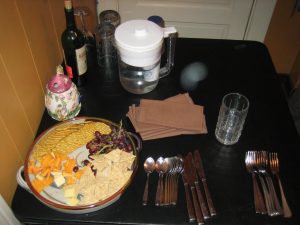 This weekend I had the opportunity to sample three local/regional shopping destinations that were all new to me:

1) The Fireplace Shop at 1000 North F Street in Richmond is an amazing little brick complex that showcases all that can be done with wood and other heat sources. From traditional fireplaces to wood burning stoves to corn pellet stoves to crazy other conflagrant configurations, it was quite a wonderland of temperature control. With the added bits of atmosphere like lazy cats sprawled across warm surfaces, fireplace and chimney sweep nostalgia everywhere, and the hustle-bustle of workers in workshops catering to the demands of the cold season, it was a nice place just to be and observe. The store also adjoins a ceramic tile store (which sells the locally made Terra Green Ceramics line) and a brick/stone store, so you can knock out quite a bit of home improvement planning in one place. I can't imagine there's one of these in every community these days, and I'm certainly grateful to have one here. END_OF_DOCUMENT_TOKEN_TO_BE_REPLACED

Two stories of security failure for this blustery day:

1) Apparently, all you have to do to throw off the facial recognition software that protects us from identity theft or worse, is smile:

And then he had the gall to spin it as an improvement, since it would be horrible to admit that humans had done a better job:

The new technology represents an advancement of what the BMV already was doing, Rosebrough said. BMV employees always have looked at the old photo of a person to see if it looked like the person seeking a new license.

2) I was at a local video store yesterday, trying to rent a video using Anna Lisa's account. I gave the cashier her phone number and name, and he said he'd have to call her to verify that it was okay for me to rent on her account. When she didn't pick up, I offered to call her on my cell phone (in case she wasn't picking up the call from an unknown number), and the cashier said, "okay, yeah, just ask her if it's okay and then you can tell me what she said." The "do it yourself" (DIY) movement is sometimes talked about as a new or emerging phenomenon, but when you reduce it to its essence - "people creating or repairing things for themselves without the aid of paid professionals" - it's clear that DIY is just a new label for a way of living that is as old as human existence itself.

Our culture likes to take the old and repackage it as the new so it's more exciting and engaging. I don't have any problem with that per se - there can be something creative and innovative in finding different ways to present ideas, world-views, ways of living so that they're more accessible to more people. We all go through different kinds of personal discovery about what we're capable of, so why not have a "new movement" that helps support and nurture that for folks who are in that place right now?

This is what I thought I was being pitched when I got an invitation to subscribe to Ready Made magazine, which presents itself as "the only do-it-yourself (DIY)/lifestyle magazine for young people. It entertains and informs through DIY projects for fast-evolving lifestyles." It sounded like a good support resource for learning more about self-sufficient living. I showed the invite to Anna Lisa and we both agreed that it looked like it would be useful, AND that we were excited such a publication existed at all. But when the first issue arrived, it only took me a few hours before I knew we'd be canceling the subscription. Here's why:

END_OF_DOCUMENT_TOKEN_TO_BE_REPLACED 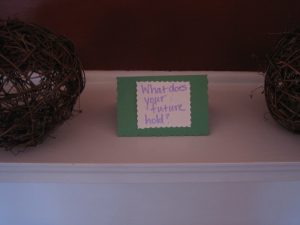 When I first started joining the Boards of Directors of various organizations in Richmond, I was intimidated by the thought of learning the proper procedures and cultural norms that dictated successful participation. What I found was that each and every organization seems to do things completely differently, and often seem to be making it up as they go along. 🙂 Yes, there are the Robert's Rules of Order and the bylaws to follow, but there's still such a wide range of behaviors related to joining, serving on, and leaving boards, and it's been fascinating to learn all about it.

One aspect of board culture that seems to be in total chaos everywhere is how a board member can leave a board of directors before their natural term is up in a positive and professional way. Based on my own experiences - sometimes as a board member who did a poor job of leaving early, sometimes as a board leader who was disappointed in how others parted ways - I've some unsolicited advice to offer: